After two seasons of cruising and having many guests over, Judy and I concluded that the table in the salon was great for eating, but took up a lot of room for getting together. For a while last summer, we took the table out of the salon and put it in the forward cabin. It opened up a lot of space. I started thinking about a compromise that led to this drop leaf table design for the salon.

The concept is simple. Cut the table in three sections. Put it back together using hinges and drop leaf locks. Rather than experiment with this design on the actual table, I bought a piece of plywood and traced the table shape on it. I then cut out the plywood table and made the drop leaf version. This is not meant to be the final version but a prototype that we could further modify to get it as we wanted it.

The first photo shows the start of the assembly process. It is a view of the back side of the plywood table cut into three sections. The cut out for the mast compression pole is plainly visible. The next photos show the table with the hinges and drop leave locks fully assembled in the flat and retracted positions. I bought the hinges and drop leaf locks at the local wood working store. I cut the piano hinges to fit. The drop leaf locks cost about $8 for a set of two. I used the round fitting that connects the table to the post from existing table.

The next photos show Judy sitting in the salon with the leafs of the table in the dropped and opened positions. Also, they provide proof that the Sun does shine in May in Wisconsin.

We are planning on trying it out for a while this summer. I will then modify the original table and cut it into the shape required. 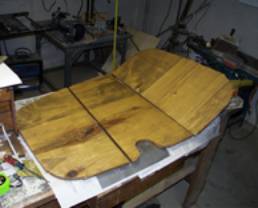 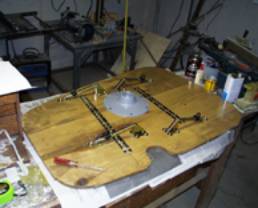 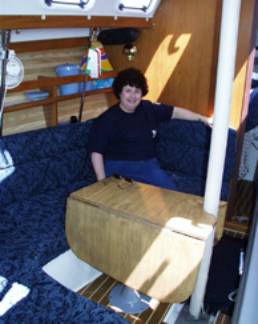 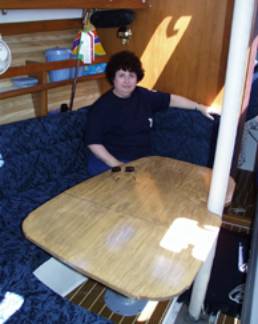