We’ve found our C-380, “Caretta” (hull # 84), to be a very able club racer, particularly in offshore events. When her skipper and crew are reasonably attentive, she can sail to her 120 PHRF rating. The stock Catalina 380 comes well fitted out with sail handling gear. However, there are some basic “go fasts” (racing equipment), which can be easily added, to help the boat sail her to her full potential. I’ve described a few of these “go fasts” below along with some installation tips learned the hard way:

Adjustable Backstay
The C-380 does not have a “bendy” rig. However, a pincer block assembly (Photo 3), connected to a 4 to 1 block & tackle, will allow you to tighten the forestay and point a little higher in moderate sea conditions. You don’t have to drill any holes or this installation. Simply replace the pin that connects one of the backstay turnbuckles to its chain plate with the pin of a D shackle. The D shackle is then connected to the lower block of the block and tackle (photo 4). Make sure that the D hackle is at least as strong as the pin it replaces. I used a ½ inch shackle and wired it closed.  If you have a bimini [or plan on installing one], measure for the wire rope pendant that runs from the pincer block assembly to the block and tackle so that it’s lower end will terminate just below the bimini when the system is fully released. Garhauer can provide all the equipment except the D shackle and pendant.

Adjustable Genoa Cars
We installed the Garhauer “Easy Glide” system. The adjustable cars allow you to quickly re-position the fairleads under load from the cockpit. For example, we may move the cars aft to de-power the Genoa as the wind builds on a heavy air beat and then forward as we fall off on a close reach. The shock cord that runs between the ball bearing car and the cam cleat at the aft end of the track keeps a slight tension on the system to prevent the control lines from fouling. Be sure to carefully measure your genoa track width before you order this system. Catalina apparently used different track vendors. All 1¼- inch tracks are not equal. [Be very careful when installing cars onto the tracks, as loose ball bearings easily bounce and
roll to you-know-where!–Warren]

Ball Bearing Foot Blocks
Garhauer will sell you a kit to upgrade your existing genny foot blocks to ball bearing blocks. These consist of a new shiv, with groves for the bearings, plus the bearings themselves. The existing foot block is easy to disassemble /reassemble, except care is needed to retain all bearings when reassembling. Ask for a few extra ball and needle bearings when you order the kit, in case some “escape”. Your grinder will appreciate the reduction in friction and it may speed up your tacks. [Note: Our new
Commodore, Earle Ellefsen, tells me that a better arrangement is to avoid the foot block altogether. He located his original track car near the aft end of the track, with the new adjustable car forward of it. A good lead is obtained with the line running through the adjustable car, then trough the fixed car, directly to the winch. Works like a charm per Earle.–Warren

Spinnaker Pole Car Assembly
Caretta has the tall rig Z-Spar (now US Spars) mast. They sell an adjustable spinnaker/whisker pole car that rides on a track that fits in the groove on the forward face of the mast (Photo 5). An “endless line” for an optimum in-board pole setting controls the car’s position. The only negative to this system is that you have to drop the mast to install the track. [Note- it may be possible to install the track with one crane session, thereby saving some $. The new track’s length is about 4 feet and it is rigid. So the mast would need to be lifted and then tilted quite far. Given enough cable slack {or disconnecting}, this could work–Warren]

Asymmetrical Spinnaker Gear
Caretta can really carry the mail when beam reaching under her asymmetrical chute. We used Garhauer series 60 blocks for sheet blocks attached to Shaeffer diamond pad eyes with backup plates. The pad eyes were mounted 3 inches inboard (approximately under the stern pulpit’s horizontal rail) and approximately 8 inches aft of the stern pulpits 2nd vertical support. A shock cord keeps the sheet blocks off the deck when not in use. Make sure your spinnaker halyard block is a swivel-type block. The one originally installed on Caretta was not. We replaced it with a lightweight Lewmar swivel block.

If you are going to race, the spinnaker-tack downhaul should be led aft to a cabin top winch for ease of adjustment. On Caretta, the tack downhaul is led through a snatch block on the bow. The snatch block is attached to a D shackle that is pinned through the lower forward hole in the stemhead plate (Photo 6). From the snatch block, the downhaul is led to a new mast-collar block mounted in the mast collar’s forward starboard hole, thence aft to a vacant cabin-top rope clutch. The advantages of this setup are that: a) you don’t have to drill any holes in the foredeck for fairleads and, b) when the spinnaker is not in use, the downhaul can be removed from the snatch block and snap shackled to the spinnaker pole ring on the mast resulting in a clean foredeck.

The go-fasts described above are pretty basic. But they will help you improve your boats performance. I’m sure that some C-380 skippers have installed more sophisticated systems that I would love to hear about.-
Steve Dublin, Capt. S/V Caretta; C380 #84

More on Spinnaker & Jib Poles
As a follow-up to Steve’s article, I did some further enquiries on spinnaker/jib poles and cars. For the older C380’s with Z-Spar masts, Julian Crisp at US Spars [was Z-Spar, tel: 386 462-3760] indicates that, for the standard [non-furling] mast, the cost is about $250 for a car and short section of track. They also sell the same track in a long version [4 meters], for those who want to store their boat’s pole on the mast. US Spars’ furling mast uses a simpler approach in which the car can be added directly to the mast groove, and is about $170; installing this car does not require stepping the mast. They also sell complete poles with fittings, at better prices than the big catalog stores, per Julian. [But remember that shipping long items means that a trucking company will get involved.] Check out their website: www.usspars.com. 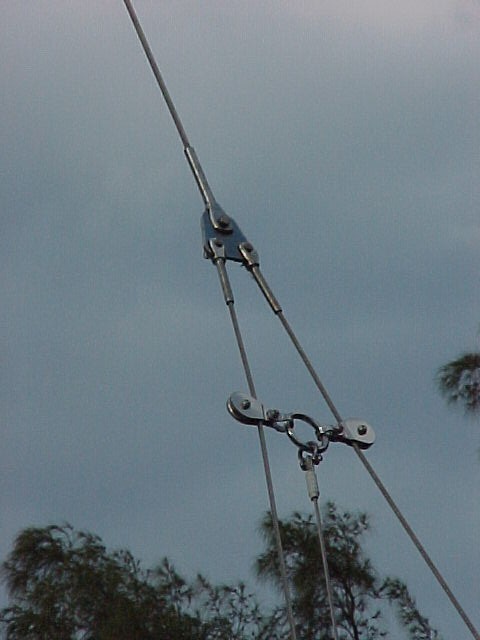 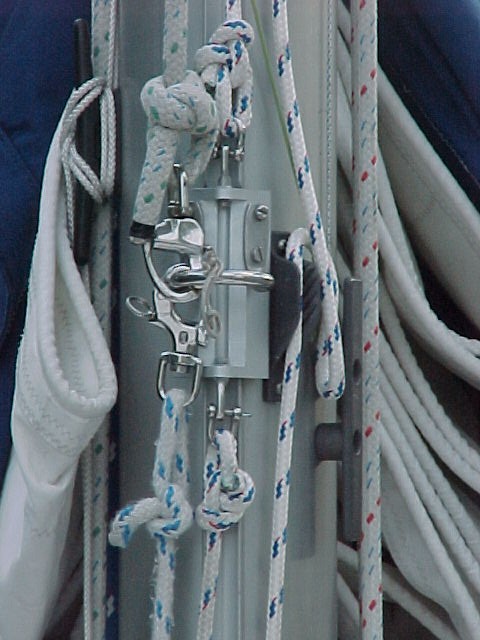 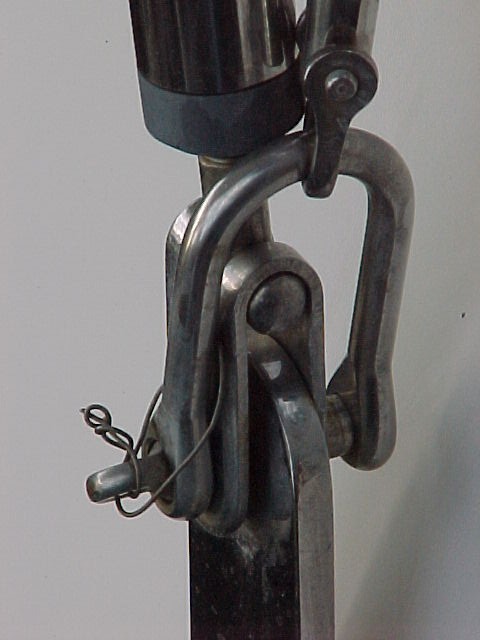